On March 15, 2018, the initiative of the WCC Round Table Foundation “Aleppo” Compatriotic charitable non-governmental organization (Aleppo-NGO) initiated the launch of the “Better Future for Syrian-Armenian Youth” project.

The “Better Future for Syrian-Armenian Youth” program aims to unite Syrian refugee youth who have come to Armenia as a result of the Syrian conflict and provide them with new knowledge and skills to promote their development and self-realization in Armenia’s civilian life.

Within the framework of the project, young people will be provided with spiritual and psychological support, as well as financial aid to meet their educational needs.

The first meeting of the four-month project will take place on March 19 at the Aleppo NGO office. The program will provide Syrian-Armenian youth with a variety of exciting events, participation in youth clubs, as well as pilgrimages.

The meetings will be conducted by the representatives of Aleppo-NGO and WCC, as well as invited international, Syrian and local experts.

Within the framework of its activity, Aleppo-NGO has paid great attention to the development of the youth’s capacities and programs aimed at attracting Armenian public life.

In its turn, the WCC Armenian Round Table Foundation works closely with other churches and non-governmental organizations to actively promote poverty eradication, sustainable community development, active involvement in church, social work, and development of civil society in Armenia and Nagorno-Karabakh.

We hope that in cooperation with Aleppo NGO and WCC Armenian Round Table, this program will have its unique contribution to the well-being of Syrian refugee youth who have been sheltered in Armenia. 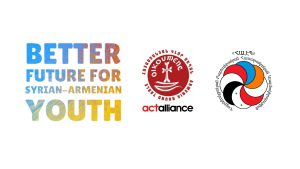