Regional project enhanced capacity of the asylum system in Armenia 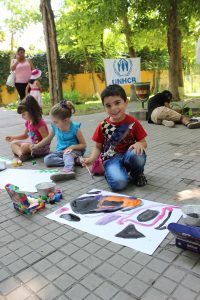 YEREVAN. On 26-27 May, a final conference of the Asylum Systems Quality Initiative in Eastern Europe and South Caucasus Project gathered migration officials from ten countries in Kyiv to discuss achieved results and plans for future collaboration. Enhanced training for government asylum officers, the creation of a research database in Russian and the development of quality assurance tools are key achievements of the regional project that has improved the refugee system in Armenia.

The two and a half year project, funded by the European Union and co-funded and implemented by United Nations High Commissioner for Refugees, was designed to strengthen the protection of asylum-seekers and refugees in six countries in the EU’s eastern neighbourhood: Armenia, Azerbaijan, Belarus, Georgia, Moldova and Ukraine. The participants benefited from active engagement with four EU Member States: Germany, Poland, Romania and Sweden. With a 2.5 million euro budget, the project focused on improvement of the quality, fairness and efficiency of asylum decision-making in the participating countries.

Following a joint survey of the national asylum system, Armenia has committed to build on existing strengths, to bridge gaps and to develop quality assurance mechanisms. “The progress in Armenia since the gap analysis report was prepared is notable. In particular, the authorities have developed draft legislative amendments to close gaps in the legal framework; have with UNHCR support adopted 7  Standard Operation Procedures to ensure procedures are consistently applied in line with international standards and have introduced a new staff position to undertake country of origin information research,” said Mr. Christoph Bierwirth, UNHCR Representative in Armenia.

Through more than 100 regional conferences, joint trainings, study visits and individualized training events, the project helped the participating countries to address the most important weaknesses and enhance practical cooperation on asylum matters. The EU Member States have provided good practice advice and shared their vast experience with the relatively new asylum systems in the region. Migration officials from Eastern Europe received access to several training modules developed for EU Member States by the European Asylum Support Office. Translated into the Russian language, these capacity building tools can be easily accessed and used by new staff and other countries.

The Head of the Migration Agency of the Ministry of Territorial Administration of the Republic of Armenia, Mr.  Gagik Yeganyan, highly appreciated the international engagement in the regional project: ‘’The international experience and support have been crucial in the future development of the asylum system in Armenia’’, he said.

The launch of the Russian version of Refworld (www.refworld.org.ru), the largest online database of key documents relating to refugee status determination, has helped to satisfy a demand for the latest, in-depth and impartial data about the situation in countries of origin. Asylum officials now have, free of charge, access to comprehensive and unbiased information to assist them in analyzing asylum applications.

Since December 2013, more than 10,000 documents in Russian have been uploaded to the website, including a vast collection of reports, policy guidance, position papers, along with decisions of the European Court of Human Rights, European Union asylum acquis and relevant national legislation. A number of thematic pages in Refworld with information on Children; Gender Equality and Women; Caselaw of the European Court of Human Rights; Refugee Protection and International Migration; Refugee Status Determination; and the UN Human Rights System, are also useful for a wider audience including human rights activists, judges, academics and researchers.

It is anticipated that this positive dynamic will continue and through the well-established cooperation it will be ensured that those in need of protection are identified and provided protection in Armenia, regardless of the person’s race, religion, nationality, sexual orientation, political views, gender or age.