From Ancient Times to Modernity

On July 22, 2015, “ALEPPO” Compatriotic Charitable Organization will launch the First session of Workshop on “Traditional Needlework: From Ancient Times to Modernity”, implemented in the framework of “Trainings for Women on Traditional Needlework” project funded by German International Cooperation Agency (GIZ). The major goal of this project is to improve well-being of both Syrian Armenian trainers and the direct beneficiaries as well as promote and pass on the tradition of Armenian Needlework.

Workshop First session will take place on Wednesday, at 15:00, at the premises of “Aleppo” CCO (address 11 Northern Ave, Yerevan, RA). 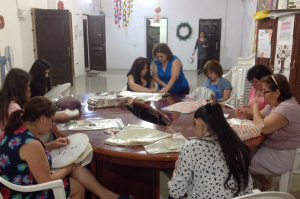