The meeting was attended by Mrs. Carmen Gulbenkian, the vice president of Gullabi Gulbenkian foundation, a national philanthropist and a board member of Aleppo CCO in USA.

During the meeting Mrs. Ani Bakhian, the Founding President of Allepo CCO gave detailed information about the organization’s activities, initiated and implemented projects.

Mrs. Balkhian highlighting the priorities of the Syrian community in Armenia emphasized the Aleppo CCO’s initiatives addressing urgent issues of housing and employment.

Reference was also made to the cooperation of Aleppo CCO and WCC Armenian Round Table Foundation, and jointly organized programs addressing the active integration of Syrians in civil society of Armenia.

At the end of the meeting, Ms. Schroder greatly appreciated the activities carried out by ALEPPO organization and highlighted that each program plays a vital role in the life of Syrian community in Armenia. 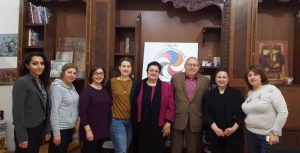