Aleppo CCO: Syrian youth for a better future in Armenia

Numerous educational meetings take place within the framework of the “Syrian youth for a better future in Armenia” program launched by the initiative of the Aleppo Compatriotic Charitable Organization.

Throughout the month of June, the Syrian youth had meetings with Saghatel Basil who delivered a speech on “Leadership” and shared important knowledge on creating necessary conditions for the involvement and self-realization of the youth in the civil society.

Actively participating in the meetings, the Syrian youth had the opportunity to receive answers to their questions as well as express their views and opinion on discussed topics.

To remind, the “Syrian youth for a better future in Armenia” program was implemented in 2015 with the initiative of the Aleppo CCO and the funding of the Embassy of the United States in Armenia. The program aims at strengthening the knowledge and abilities of the Syrian youth residing in Armenia to undertake initiatives to confront the current problems and build a better, democratic future. 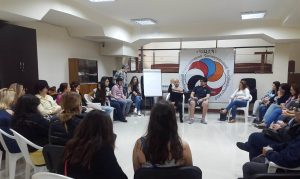