With the initiative of the World Council of Churches Armenia Inter-Church Charitable Round Table Foundation, Aleppo NGO organizes and implements this program aiming at solving several social-psychological issues faced by Syrian refugees since the outbreak of the civil war in Syria.

We’d like to inform the representatives of the Syrian community settled in Armenia that the social-psychological meetings at Aleppo NGO will take place on a regular basis. 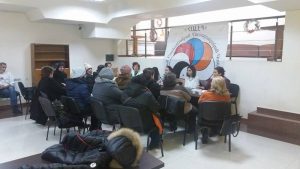