Throughout its activities, the Aleppo Compatriotic Charitable NGO had the honor of cooperating with representatives of Armenian communities around the world for the welfare of the Syrian Armenian community that faces hard times these days.

In 2016, a group of Armenian women from the city of Manchester, England organized a charitable luncheon, and the funds raised during the event were donated to Aleppo Compatriotic Charitable NGO’s “Save a Life” program to help a Syrian Armenian family to be relocated from Aleppo to Armenia.

Thanks to the efforts of the group of Armenian women of Manchester, the family of Gevorg Bolsaji, consisting of 5 people, was able to move to Armenia from Syrian on November 22, 2016.

Aleppo NGO expresses its deepest gratitude to the group of Armenian women of Manchester for their trust in the activities of the organization and for supporting the Syrian Armenian community within their capabilities. 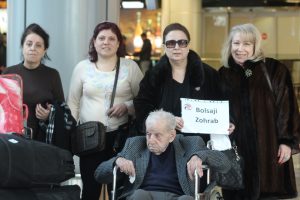