Mr. & Mrs. Edward and Carmen Gulbenkian contribute to the welfare of the Syrian Armenian community in Armenia

On October 27, 2016, the members of the Executive Board of the supporting organization of the Aleppo Compatriotic Charitable NGO in the United States organized a charitable luncheon at the Krichian’s Grill & Bistro restaurant in New Jersey, aimed at solving the everyday problems faced by the Syrian Armenian community in Armenia.

A great contribution to the charitable initiative was made by the benefactors Mr. and Mrs. Edward and Carmen Gulbenkian who expressed their desire to match all the proceeds from the event, donating 7400 US dollars to the cause.

We are happy and excited to announce that today, their desire was brought to life, contributing to the welfare of the Syrian Armenian families in need who were relocated to Armenia. The generous donation made by Mr. and Mrs. Gulbenkian will be forwarded to the “Adopt a Family” program of the Aleppo CCO.

It is a great honor for us to know of the Gulbenkian family’s confidence and trust in the activities of the Aleppo Compatriotic Charitable NGO, it inspires and motivates us, guiding us in our mission.

This contribution for solving the problems faced by the Syrian Armenian families in need settled in Armenia is a great and valuable support, and deserves to be highly praised. 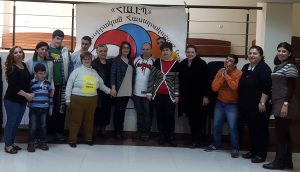