On April 11, 2017, ACCO’s Executive Board Member, Talar Tcholakian Chalian, visited the Aleppo Compatriotic Charitable Organization-NGO (Aleppo-NGO) in Yerevan to meet with Aleppo-NGO’s Board, and get briefed about the organization’s ongoing programs and projects that address the needs of Syrian-Armenians in Armenia.

Being a member of the Executive Board of the Aleppo-NGO’s supporting organization in USA, Mrs. Talar Tcholakian Chalian has her own unique contribution to ensure continuation of the activities of Aleppo-NGO.

The Aleppo Compatriotic Charitable Organization (ACCO) was established, in the United States in 2014, to support the relief activities of the Aleppo-NGO in Armenia. Over the past several years, Mrs. Talar Tcholakian Chalian has brought her unique contributions to ACCO’s fundraising efforts across the United States, and has played a leading role in the launch of the Aleppo-NGO’s “Save a Life” campaign.

Thanks to the invaluable support and contribution from Mr. and Mrs. Ara and Talar Chalian, many Syrian Armenian families in need receive vital assistance. 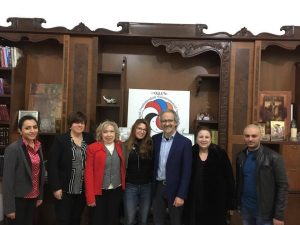