On April 22, 2017, Dr. Ani Kalayjian, the founding president of the Association for Trauma Outreach and Prevention “Meaningful World”, member of the UN NGO Committee on Spirituality, Values and Global Concerns, head of the international department of the Committee on Violence Prevention and Guidance of the American Psychological Association, held a group therapy session for Syrians who have resettled in Armenia due to the ongoing conflict.

The founding president of the Aleppo-NGO Ani Balkhian welcomed Dr. Kalayjian at the organization and expressed her gratitude for granting attention to organization’s activities.

Dr. Kalayjian conducted a therapeutic practice at the center of the Aleppo-NGO with Syrians who were relocated to Armenia because of the war in Syria.

Trauma expert Dr. Kalayjian also introduced the “Meaningful World” humanitarian relief program, within the framework of which she launched a therapeutic model created by her. The model enables experts to conduct posttraumatic diagnose, characterize conflicts, violence, emotions, shocks, as well as to conduct research and evaluation. After this, a medical-psychological program is used to eliminate the trauma consequences.

Dr. Kalayjian is the author of the “Disaster and Mass Trauma” research. She authored different theories and therapeutic practices, some of which aim at preventing generational transition of the genocide trauma. 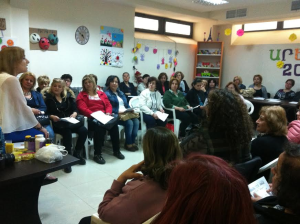