Throughout its activities, the Aleppo Compatriotic Charitable Organization-NGO (Aleppo-NGO) has the honor of cooperating with individuals and institutions engaged in selfless activities for the benefit of the nation.

In October 2016, honoring the Aleppo-NGO with her trust, benefactor Narine Davtyan highlighted the importance of the organization’s “Save a Life” project and offered her unique support to the Syrian-Armenian families that are beneficiaries of the project.

After taking a closer look at the problems faced by the Syrian-Armenians relocated to Armenia, such as housing and employment issues, the benefactor could not stay indifferent and expressed a desire to support the families as she was able.

Thanks to the efforts of the benefactor, a large number of Aleppo-NGO’s beneficiary Syrian-Armenian families have been provided with and continue to receive various humanitarian aid.

Many individuals from around the world joined Narine Davtyan in her patriotic activities, and thanks to their goodwill, an apartment was purchased. Today, the Syrian-Armenian family of Tamar and Baghdasar Sargsyan, after enduring the chaos of war in Syria and eventually settling in Armenia, is building a future in their own home.

Aleppo-NGO expresses its deepest gratitude to Narine Davtyan and her friends who have spared no effort to ensure the welfare of the Syrian-Armenian families settled in Armenia. 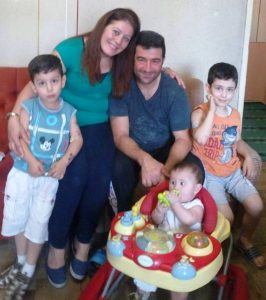