On September 28, 2017, the Aleppo Compatriotic Charitable Organization-NGO (Aleppo-NGO) hosted a meeting of representatives from institutions collaborating within the framework of the “Overcoming the Consequences of War Together” project, an initiative organized by the “German-Russian Exchange” NGO and the “Country of Free People” NGO (Ukraine).

Vice-president of Aleppo-NGO, Hayasa Tahmazyan, welcomed the guests to the office of the organization, gave a presentation providing information on Aleppo-NGO’s activities and answered questions raised by the attendees.

Ms. Tahmazyan stressed the importance of the project and drew parallels between its goals and the mission of Aleppo-NGO. Aleppo-NGO works to help vulnerable Syrian refugee families in Armenia overcome the social-psychological consequences of the Syrian crisis and achieve social-economic stability.

The “Overcoming the Consequences of War Together” project was launched in August 2016 and will continue until October 2018.

The project seeks to create a dialogue between civil societies in countries who have faced similar challenges, sharing expertise and experiences to ultimately find long-term solutions to their common problems. The main focus areas include dealing with war-related trauma, combating domestic violence as a consequence of war, overcoming conflict-related discrimination, effectively integrating refugees and internally displaced persons, and promoting social entrepreneurship to mitigate social-economic conflicts. 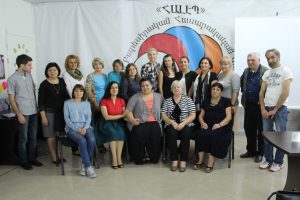 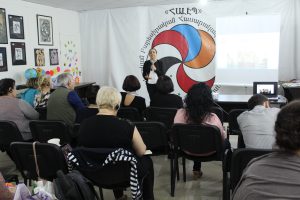 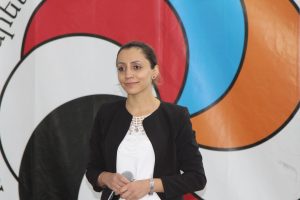