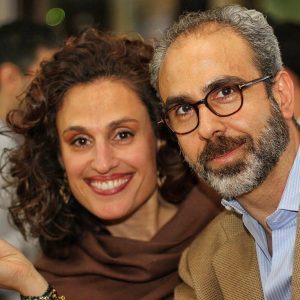 Aleppo-NGO’s ongoing activities are imbued with strength and energy by the benefactors who place their faith in the organization. Their trust helps Aleppo-NGO sustain its ongoing programs in support of the Syrian-Armenian community in Armenia, and enables the organization to create new programs to meet the needs of its beneficiaries.

Two of the benefactors integral to the continuation of Aleppo-NGO’s programs are Paul and Rachel Nadjarian, who have demonstrated special energy and initiative in their support for displaced Syrian-Armenian families settled in Armenia.

Mr. and Mrs. Nadjarian played a vital role in the NGO’s “Save a Life” program, which rescued hundreds of Syrian-Armenians from the clutches of the Syrian War and brought them to Armenia, where they are now building new lives.

Mr. and Mrs. Nadjarian have also contributed to the “Adopt a Family” program for almost two full years, helping the Syrian-Armenian Chepelian family cover the cost of food, rent, and utilities, as well as expenses related to ongoing medical treatment.

The Nadjarian family’s generosity is such that this past year, even at their own moment of grief, they found the strength to think of others. When the family’s grandfather, Artur Nadjarian, passed away in 2017, they requested that memorial bequests be directed to Aleppo-NGO.

Aleppo-NGO conveys its deep gratitude to the Nadjarian family for their goodwill and generosity toward displaced Syrian-Armenians. This exemplary family played an indispensable role in the realization of Aleppo-NGO’s mission, and has single-handedly changed the lives of countless Syrian-Armenian displaced families.