On February 24, 2018, Syrian children gathered at the center of the Aleppo Compatriotic Charitable Organization-NGO (Aleppo-NGO) for their weekly meeting.

Mother’s Day is celebrated on various days in many parts of the world, most commonly in the months of March or May. It is a celebration honoring the mother of the family, as well as motherhood, maternal bonds, and the influence of mothers in society. In Syrian-Armenian households, Mother’s Day is celebrated on March 21. To properly celebrate this day, Syrian-Armenian children gathered at Aleppo-NGO within the framework of Children’s Club, learned new songs and poems dedicated to mothers. They are planning a new performance dedicated to the subject.

The children also learn about the connection of mothers to the motherland, mother nature, and mother tongue. These were the subjects that would inspire them to paint at this meeting.

The second half of the gathering was dedicated to geography, as children were quizzed on interesting geographic facts, played games and sang.

Please note that the meetings take place at the office of Aleppo-NGO, located at 11 Northern Avenue (-1 floor), entrance from Abovyan Street. 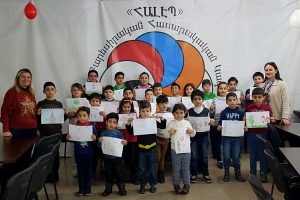 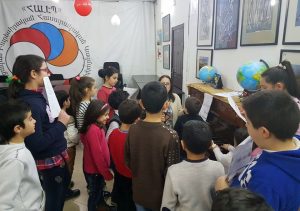