On June 21, 2018, Aleppo-NGO’s Executive Committee members met with the Minister of Diaspora, Mr. Mkhitar Hayrapetyan, to present the mission and work of the organization, and raise its concerns about the unresolved challenges facing Syrian refugees in Armenia.

After presenting the organization’s ongoing projects, including “Host a Family,” “Better Future for Syrian Armenian Youth in Armenia,” “Adopt a  Family,” etc., Aleppo-NGO stressed the paramount need for finding permanent housing solutions for Syrian refugees in Armenia and discussed potential opportunities for cooperation with the new government in achieving this goal.

“We had a very productive meeting with Minister Hayrapetyan, during which we briefed him about the unresolved challenges facing Syrians in Armenia,” said Ani Balkhian, President of Aleppo-NGO. “We are hopeful that the appointment of Minister Hayrapetyan marks the beginning of a new chapter for collaboration between the Ministry of Diaspora and Aleppo-NGO, as we strive to find permanent housing solutions for Syrians refugees.”

During the meeting, Minister Hayrapetyan reiterated the Armenian government’s commitment to solving the issues of Syrian refugees in Armenia and promised to review Aleppo-NGO’s plans for permanent housing for Syrians in Armenia.

In the next few months, Aleppo-NGO will be presenting its durable housing project proposals, with specific and operative requests, to the new government of Armenia.

At the end of the meeting, Aleppo-NGO’s volunteer Hagop Togramadjian presented a copy of his research study on Syrian refugee issues in Armenia to Minister Hayrapetyan. 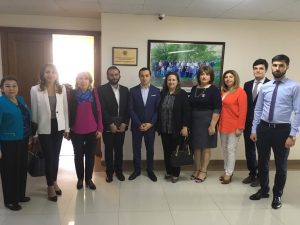