On November 29, 2018, Aleppo Compatriotic Charitable Organization (Aleppo-NGO) launched the Aleppo Cuisine Center, a social enterprise that will create employment opportunities for Syrian women and other vulnerable groups in Armenia.

Among the guests of the grand opening ceremony were Davit Sargsyan, the Deputy Minister of Diaspora Ministry of RA, Ambassador Extraordinary and Plenipotentiary of Japan in Armenia H.E.Mr. Jun Yamada, the Ambassador Extraordinary and Plenipotentiary of the Federal Republic of Germany Mr. Bernhard Matthias Kiesler, Chargé d’Affaires of the US Embassy in Armenia Mr. Rafik Mansour, the Head of Migration Service of MTAD Armen Ghazaryan, UNHCR Representative in Armenia Ms. Anna-Carin Öst, the Head of Social Welfare Department of Yerevan Municipality Ms. Ruzanna Zakaryan, and representatives of numerous local and international organizations, including GIZ represented by Ms. Karine Simonyan and “Armenian Caritas” represented by Ms. Lusine Stepanyan.

“On the fifth anniversary of its mission, Aleppo-NGO opens the doors of Aleppo Cuisine to create employment opportunities for Syrian refugees, afford them an opportunity for a prosperous life, and protect their labor rights in the Republic of Armenia,” said Ani Balkhian, the Founding President of Aleppo-NGO.

More than $200,000 (USD) in donations and grant funds have been provided towards the establishment of Aleppo Cuisine by the Parish Council of St. Kevork Armenian Apostolic Church of Houston, Texas (USA), the Government of Japan through the Embassy of Japan in Armenia, the Government of Germany through GIZ (Deutsche Gesellschaft für Internationale Zusammenarbeit), the US Government through the US Embassy in Armenia, the European Union through the “Armenian Caritas” Charitable Organization, and individual donors and sponsors, including Dr. and Mrs. Osterbauer-Tanielian (London, UK) and Mr. Vreij Kolandjian (USA).

“We hope that this support will become a strong bond and embodiment of friendship, as well as mutual sympathy which traditionally forms the foundation of Japan-Armenia relations,” said H.E. Jun Yamada, Ambassador Extraordinary and Plenipotentiary of Japan, in his speech.

Aleppo Cuisine Center’s goal is to create employment opportunities for Syrian refugee women who found refuge in Armenia after escaping the Syrian conflict, as well as to promote the economic and social integration of refugees and other vulnerable groups in Armenia. 100% of the profits of Aleppo Cuisine will be directed towards the creation of further employment opportunities within the center and to provide humanitarian aid to displaced populations.

“Aleppo Cuisine Center is a great example of the initiative refugees from Syria brought to Armenia. Thanks to GIZ, the German Government has supported Syrian refugees in their efforts to integrate into Armenian society,” said H.E. Bernhard Matthias Kiesler, Ambassador Extraordinary and Plenipotentiary of the Federal Republic of Germany.

“The Embassy is proud to support the Aleppo Cuisine Center – a vibrant social enterprise that upholds and promotes values that are dear to the United States,” said Rafik Mansour, Chargé d’Affaires of the US Embassy in Armenia. “I am confident that the opening of the Aleppo Cuisine will serve as another major step toward empowering the Syrian-Armenian community here in Armenia by promoting their economic integration into society.”

Aleppo-NGO hopes that Aleppo Cuisine Center will emerge as one of the leading Middle Eastern and Western Armenian food service providers in Armenia. Customers can enjoy the center’s cooked products at the center located at 2/1, 83 Yeznik Koghbatsi Street in Yerevan, can purchase semi-fabricated (frozen) products, place special orders during the holiday seasons, and submit catering service requests by contacting the center’s management at: 011-54 53 69; or 098 54 53 31; or 055 54 53 61, or by email: orders@aleppocuisine.am. 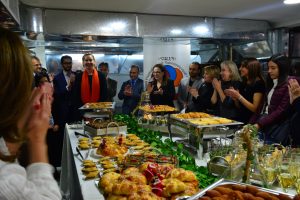 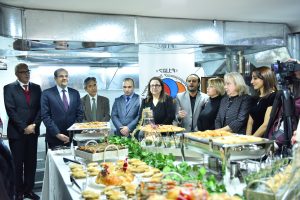 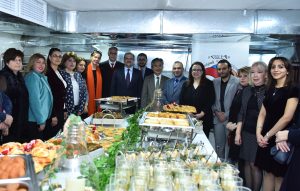