“I’m happy to do whatever you need. I just want to be helpful.” Lara Kaiserian

“I’m happy to do whatever you need. I just want to be helpful.”

That’s what I said during my volunteering interview with Aleppo-NGO, and I meant it. Even though I was technically there to be a content writer, I was amazed by the organization’s many programs and projects and wanted to help however I could. At the time, I had no idea how literally the “whatever you need” was going to be taken, and it was only about a week before my job description changed from “content writing” to “anything and everything”.

That might sound like an exaggeration, but just wait. My background is in architectural engineering, something I thought would be completely useless to a humanitarian organization. During my interview, I was asked if I would be willing to do some architecture/engineering work because there was a project in development that might be able to use those skills. Baffled, I said, “Of course,” and before I knew it, I was working on the Aleppo Cuisine center.

At that time, the project still had a somewhat undefined timeline. Since I was only planning to volunteer for six weeks, I didn’t expect to see the results of my work. I tried to research and document as much as I could so that whenever construction started, they would have what they needed. I took measurements of the existing space, put together some architectural plans and graphics, and helped to edit grant applications to secure funding for the project. I also happily continued my content writing work, proofreading and writing articles for the website and doing whatever else came up.

Then, suddenly, everything with Aleppo Cuisine sped up. There was a start date for the construction process. The project was actually happening! If I stayed longer, I could be involved with moving it from a dream to a reality. I extended my six-week commitment to six months which was approximately the estimated construction time.

During those six months, the “whatever you need” became very broad. Sometimes I was a content writer, sometimes an engineer, and sometimes an architect, but it didn’t end there. Depending on the day, my job description could also include photographer, web designer, graphic designer, editor, logo designer, social media manager, fill in the blank. 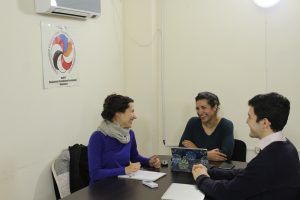 For some people, maybe that sounds like a nightmare, but for me, it was perfect. I’ve always had a diverse set of interests. I like to write, I like to design and be creative, I like being an engineer, and I like to learn new things. This was the first time that I could apply so many of those interests to the same job, and I loved it! Every day was different. There was always something unexpected popping up. I felt useful and like I was doing something meaningful. What could be better than that?

Well actually, it was better than that. I also met some amazing people at Aleppo-NGO. They’re all passionate about the mission of the organization and about making the world a better place. It was truly a joy to work with each and every person I encountered at Aleppo, from the other volunteers to the staff and the board members. Our relationships extended beyond the office, with coworkers becoming friends. 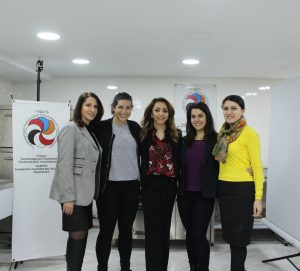 My time volunteering at Aleppo-NGO was nothing like I imagined. How could I have? I thought I would stay for six weeks, write a few articles, and go home. Instead, at the end of six months, Aleppo Cuisine was more than just an idea. It was a concrete, physical place with equipment and business plans and food samples that I happily taste-tested. I finished a project creating written and visual content for a website update. I learned new computer programs and put old skills to the test. It was exciting to see some amazing projects become realities and know that I played a role in making them happen.

Leaving wasn’t easy. After six months, I felt like part of the team. I believed even more in the organization’s work and still enjoyed going to the office each day. Saying goodbye was like leaving family behind.

I am so thankful for the opportunities I had at Aleppo-NGO, and I’ll never forget my time there. I’m excited to see what the future has in store for the organization and for the Syrian community in Armenia!

Lara Kaiserian volunteered with us at Aleppo-NGO, through Birthright Armenia fund, last year. We believe with our combined efforts, we were able to create a better future for the families who fled Syria and are currently living in Armenia. We are thankful that Lara’s intended six- week journey in Armenia changed to an extended six months! Lara’s valuable experience, devotion, and outstanding passion helped implement various activities for our organization. We are grateful for her determination and for believing in Aleppo-NGO’s mission.