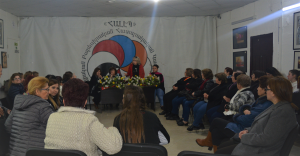 “ALEPPO” Compatriotic Charitable Organization held one of their weekly socio-psychological meetings on Friday, 5 April, 2019, with an attendance of 35 women. Zovig Magarian-Baytarian, was in attendance, who is the Vice-President of Aleppo-NGO. Zovig presented the meeting’s agenda, and how the focus topic would be, “Getting Involved with our Values.” She explained how this year is the 60th anniversary of the Sasuntsi Tavit statue, which beautifully stands at the Square near the railway station. It is also the 120th anniversary of Yervant Kochari, who built the statue. It wasn’t even three years of Kochari immigrating from France to Haystan, in 1939, when he thought of the idea of building the statue.  Not even two years after finishing and installing the statue, he is accused of treachery by the Soviet Union. He is thrown into prison, and simultaneously the statue disappears from the square. The Soviet authorities hope they can find and restore the statue, and they ultimately rely on Yervant Kochari to do the work. In 1959, the opening of the statue was celebrated and placed in Yerevan’s square near the railway station. Kochari’s statue of Sasuntsi Tavit is seen as a masterpiece and is one of the key symbols of Yerevan. The statue contains many deep meanings and ideologies. 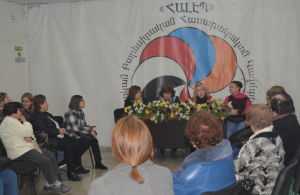 The second part of the meeting focused on, “Our Armenian Traditions”. The theme was presented by Vania Mesriyeh Karadjian. Vania asked the participants what provinces and regions the women’s ancestors came from in Western Armenia. She stated the importance of keeping the Armenian community alive in the diaspora, and holding onto the cultural traditions and teachings. Vania enthusiastically asked the women what were the traditional foods and holidays that were celebrated in those provinces of Western Armenia. The women were given the opportunity to share their stories and recipes with the rest of the group. The room was filled with joy and enthusiasm, and the topic discussion ended with a participant sharing the story of her ancestors who are buried at the S. Nerses Shnorhagali cemetary in Rumkale, which is located in present day Gaziantep. 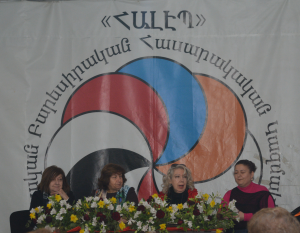 The third portion of the meeting, “Stay Healthy”, was presented by Dr. Mayda Yavushian, who values plant-based diets. She discussed the importance of incorporating plant-based foods, like vegetables and fruits, in our daily meals, and staying away from fats, oils, and meat. An unhealthy diet can lead to many other problems and diseases down the road. At the end of her lecture, Dr. Yavushian answered the wide range of questions the participants had about healthcare and a healthy diet.

In conclusion, the Aleppo-NGO’s socio-psychological support for Syrian-Armenians is free and without charge. Aleppo-NGO aims to help the Syrian-armenians integrate into Armenian society and to also provide them with any other support they might need. This week’s socio-psychological meeting hosted speakers from different professions. It gave the participants the opportunity to hear about each speaker’s experience and expertise.