Krikor Astabanian: The flower seller of Aleppo is in need of your support

“Flowers, I love flowers!” exclaims Krikor. “I used to skip school so I could go and pick flowers. Everyone in Aleppo knew me by my nickname—I was Krikor, the flower seller!”

Krikor had to flee his beloved country (Syria) duo to war and sought a safe life in Armenia in 2012.

In Armenia, Krikor couldn’t sell flowers, so instead he started painting homes and working as a security guard. Unfortunately, his local employers took advantage of his kindness and refused to pay him.

After finding a new job, he started accumulating money to try to bring his mother to Armenia.

In October 2013, while traveling to Aleppo via Turkey to see his mother, he fell foul of the conflict’s ruthless sectarian edge, which he had feared since the earliest days of the uprising. In between the border and Aleppo, the bus he was traveling on was stopped at a checkpoint controlled by Al-Nusra Front, one of the most extreme Islamist rebel groups. The fighters checked all the passengers’ passports, and those with Muslim names were allowed to go. Krikor, with his Armenian surname, was arrested, detained and tortured. His only crime was being a 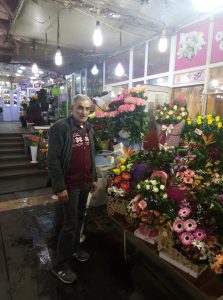 Krikor was terribly tortured, electrocuted, and severely beaten with belts and hands. His entire body bled. “I survived thanks to my faith and prayers.”

He was reciting prayers in Arabic while being tortured. The Arabic prayers helped him. The terrorists asked their leader to stop torturing Krikor, and he relented. If he hadn’t, Krikor would have become another Christian victim of the torture room. Krikor eventually escaped and reached Aleppo on foot.

After the situation in Aleppo escalated, Krikor relocated to Armenia once again with the help of the Aleppo Compatriotic Charitable Organization (Aleppo-NGO).

After he arrived in Armenia, Krikor started having heart problems duo to everything that happened to him. He was diagnosed with an ischemic heart disease. With your help Krikor can have an open-heart surgery. Your compassion will help Krikor to blossom like his beloved flowers.

Copy of Krikor’s Financial Statement issued by Astghik Medical Center. Krikor is in need of 4,500,000 AMD (approx. $10,000) to have open heart surgery.

The price for surgery is 4.500.000 AMD / 10.000 ($). Aleppo Compatriotic Charitable Organization (Aleppo-NGO) and several individuals have provided certain amount of money but Krikor needs additional financial assistance for the surgery, medical expenses and rehabilitation. Because of heart pain Krikor cannot work and only takes care of his health․ Without additional help it’s impossible for him to gain the money.

We sincerely appreciate any support. Krikor, already tormented as a refugee, needs our help to overcome his disease. Any donation (button below), no matter how small, would mean so much to Krikor and his family.

Not only your donations can help Krikor’s life, but also by sharing this message with your friends and community through social media (#helpkrikor) or email, can make the difference.