On November 30, 2019 “Aleppo Cuisine” Center, established by Aleppo Compatriotic Charitable Organization (Aleppo NGO), participated in the Christmas Charity Bazaar organised by “Welcome to Armenia” Diplomatic Association of the Ministry of Foreign Affairs of the Republic of Armenia in partnership with Tovmasyan Charity Foundation, where representatives of foreign diplomatic missions accredited to Armenia, crafters and artists, as well as Armenian producers took part in.

The funds raised during the Charity Bazaar will be donated to the implementation of three projects, aimed at providing opportunities for the mothers of children with cerebral palsy disabilities to have access to professional education and acquire skills, at providing consultations for the prevention and resolution of family problems, and at digitalising the famous literary works with the help of people with disabilities.

In  Charity Bazaar “Aleppo Cuisine” Center  represented their variety of dishes made with Middle Eastern recipes and spices.

Participants of Charity Bazaar tasted presented dishes with satisfaction, as well as got acquainted with the main mission of “Aleppo Cuisine”Center, that is – to use all the profits for providing assistance to Syrian Armenian and other vulnerable families.

Aleppo Cuisine is a social enterprise that provides catering service and culinary trainings designed not only for chefs, but also for tourists who want to get acquainted and cook Western Armenian dishes. Aleppo Cuisine designates 100% of its net profits to the socio-economic betterment of vulnerable populations in Armenia. 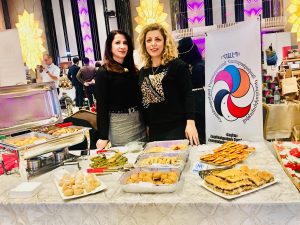