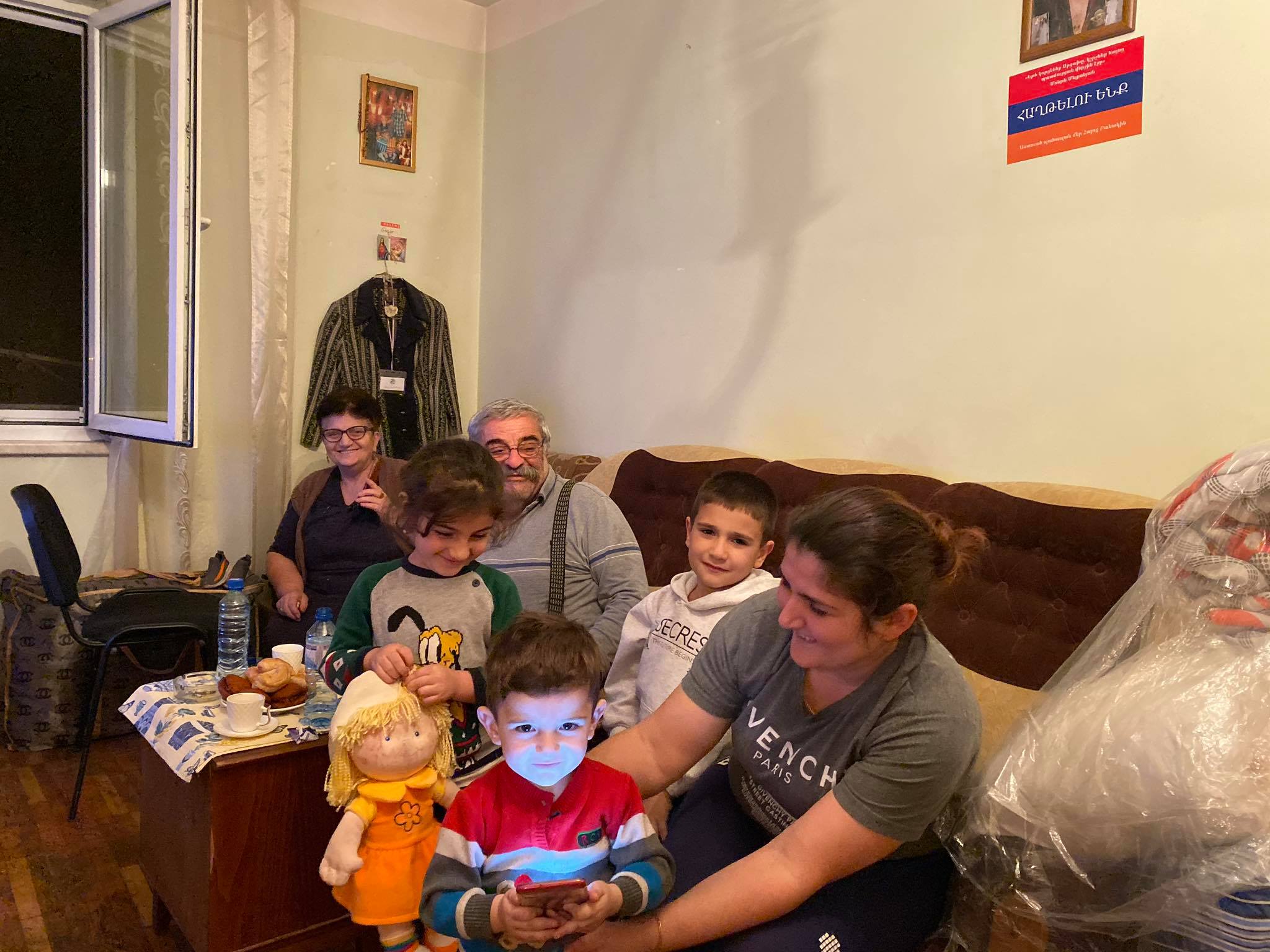 Since September 27, 2020, the aspiring Sultan of Ankara, Recip Tayeb Erdogan, and the Tyrant of Baku, Ilham Aliyev, backed by mercenaries comprised of several brigades from the Syrian National Army and equipped with Israeli weapons, launched a new genocidal campaign against the Armenians, this time in the Republic of Artsakh (Nagorno Karabakh).

Through the use of Turkish and Israeli UAVs and other legal and illegal weapons, Azerbaijan has systematically targeted civilians and civilian infrastructure to demoralize the Armenian forces fighting on the frontlines by pre-occupying their thoughts about the well-being of their families.

In the first 21 days of the conflict alone, Azerbaijan killed at least 37 civilians, including a disabled and unarmed man and his mother in the city of Hadrut, and wounded more than 115 others. Moreover, Azerbaijan’s systematic attacks damaged or destroyed more than 7,500 private properties and more than 1,000 civilian objects.

While every Armenian in the world has been glued to their TV, laptop or smartphone screens, trying to follow the developments of the conflict as closely as possible and mourning the loss every single one of the 900 plus Armenian soldiers who have been killed thus far (as of October 22, 2020) in the conflict, a humanitarian crisis is emerging in Armenia which requires an immediate response: the matter of more than 20,000 Armenians who have been displaced from Artsakh and are in urgent need of humanitarian assistance.

A few nights ago I met with one of those families who were displaced from Hadrut (under the control of the Azerbaijani mercenary forces at time of writing) and moved into one of Aleppo-NGO’s “Host a Family” program homes, which they will be sharing with a Syrian-Armenian.

Nikolay the senior was lying on the sofa surrounded by his three grandchildren when I walked into the apartment. His wife was sitting in the armchair positioned behind Nikolay’s head while his daughter-in-law was unpacking the bags of clothes they had managed to grab while escaping Hadrut to Yerevan.

Upon seeing me walk into the apartment, Nikolay sr. sat up and to greet me, while Aram (7 years old) and Ani (5 years old) shifted to assume more defensive positions, hiding behind their mother and grandfather.

Since I do not have the friendliest of complexions and do not have the most Armenian of faces, most children get scared when they see my bald head and my long beard so their reaction was expected.

But Nikolay the junior (2 years old) was brave– he ran towards me to see what was in the bags I was holding.

After putting the bags on the floor, I introduced myself to Mr. Nikolay Sr. and his family and sat down while Nikolay Jr. started unpacking the food (prepared by Syrian-Armenian ladies working at Aleppo’s cuisine center) I had brought for the family.

After explaining a little bit about Aleppo-NGO and the Host a Family housing program, which was launched in 2015 to provide a sustainable housing solution to vulnerable Syrian-Armenian families, and informing them that we are now requesting from our Syrian-Armenian beneficiary families to make additional room in their homes for their brothers and sisters who have been displaced from Artsakh, I asked Mr. Nikolay if he had heard from his son, who is on the frontlines protecting his homeland from the Turkic invasion.

“We haven’t heard from him for a day now,” said Nikolay Sr. “He brought me to Yerevan three days ago and went back to fight.”

The mother, daughter-in-law, and children left Hadrut on the first day of the ongoing conflict in Artsakh, following the first strike on Hadrut on September 27. Initially they were staying with a relative but now, with more relatives escaping Hadrut, their Yerevan based relative had no room to house Nikolay’s family.

After exchanging a series of questions and answers with Nikolay and his family, during which I explained to them that the Syrian mercenaries who were invading Artsakh had also committed atrocities and war crimes in Syria against Armenians, Kurds, and Arabs, I assured them they were welcome to stay in this tiny two-room Host a Family apartment.

“I hope you are able to go back home as soon as possible,” I said. “But please know that you are welcome to stay here for as long as you need to. We will provide food and everything else you need for as long as necessary.”

Twenty minutes later I realized that I had brought a doll with me from Aleppo-NGO’s office, knowing that the family had little girl, so I took out the doll and handed it to Ani and then turned towards Aram and asked: “Do you play football?”

Initially Aram was reluctant to answer my question, so Nikolay Sr. jumped in and said: “Of course he plays football. He also loves cycling, so we bought him a bicycle too.”

Encouraged by his grandfather’s response, Aram added: “I hid my bicycle in the basement of our home to stop the Turks from stealing it.”

After processing what I had just heard from 7-year old Aram, I replied: “We will get you another bicycle if you don’t go back home soon.”

Nikolay’s family owned a home in the village of Trakht (Armenian for Heaven) in Hadrut where 400 Armenians used to live, according to Nikolay. Satellite imagery analysis by independent international analysts indicate that Aliyev’s mercenaries had control of Hadrut as of October 20, 2020.

“We were in the process of renovating our house when this war started,” said Nikolay’s wife. “We constantly build and they [the Turks] constantly destroy.”

Their son had taken out a loan recently to renovate their home which was halted abruptly by the current conflict.

“Our house had a barn. Right before we escaped, we released all the animals because we knew we were not going to return as soon as we want to,” said the daughter-in-law who jumped into the conversation, after making coffee for everyone. “I hope our dog is still alive.”

Approximately an hour and a half into our encounter, Nikolay’s phone started ringing. It was his son calling from Artsakh, from the frontlines. Despite my best efforts to decipher their conversation, I understood less than 10% because they were speaking in half Russian and half Hadrut dialect, but eventually Nikolay handed me the phone and said: “My son wants to speak with you.”

I was surprised but excited to talk to one of our heroes on the frontline, so I picked up the phone and said: “Hi, this is Sarkis speaking.”

“Hi Sarkis, I just wanted to thank you for helping my family,” said the 33-year old Armenian hero from the village of Heaven who is defending Artsakh and waging the existential war for the survival of the Armenian nation.

“You just stay safe and take good care of yourself and your brothers on the frontlines,” I replied. “Please do not worry about your family because I promise you that they will be taken care of, for as long as necessary, until you come to Yerevan to pick them up and take them back to your home in Hadrut.”

As a 33-year old man myself, a second has not gone by in the past 27 days when I have not asked myself this question: What the hell are you doing in Yerevan when you could be on the frontlines defending your homeland?

Everyone I’ve discussed this issue with has told me I’m more useful behind a laptop screen than on the frontlines, especially considering my non-existent military experience and extensive experience in other matters. While they may be right, the knowledge that 18-year-old or even 60-year-old Armenians are falling in defense of our nation as I sit in an apartment in Yerevan to write this story or engage in other matters is psychologically draining.

Why should I go to sleep in my bed for 27 days running when 18-year-old heroes, who have the potential to be far more resourceful and accomplished than I am at 33, sleep on the ground which has become wet with rain, sweat and blood?

Why should I wake up in the comfort of my home when 50-year-old heroes, who have left behind children, wives, parents, are constantly waking up to the sounds of bombs or not waking up at all because our enemy is a coward—using UAVs, including Kamikaze drones, to target civilians and warriors because they know they can’t win in a conventional war against the Armenians?

“I have a heart condition,” said Nikolay. “Otherwise I would have stayed and fought alongside my son in defense of our lands.”

“Baron (Mr.) Nikolay,” I said. “I promise you that every single one of us– man, women, elderly and child–will fight in defense of our homeland and our nation if that’s what it’s going to take to win. We have no other choice!”

On October 23, Nikolay’s daughter-in-law found out that her sister’s husband, 30, was martyred during the fighting on the southern frontline.

But until our last drop of blood is spilled, Armenians must collectively promise to take care of the families of our heroes who are fighting on the frontlines because regardless of how heroic they are and how resilient they are, they can’t win (we can’t win) unless they know that their families and loved one at home are being taken care of by their nation.

Nikolay’s son is one of our heroes on the frontline. Nikolay Jr. (2 years old) is clearly a hero—he was not fazed by my “scary” looks when I entered the apartment. But right now, we must all act like humanitarian heroes and support the families of not only our fallen heroes but those alive, otherwise we will fail as a nation!

Aleppo-NGO has supplied meals to more than 2,500 displaced Armenians in Yerevan since October 8, 2020. The organization has also provided thousands of lunch meals to the healthcare workers of the Ministry of Healthy who are retrieving the wounded and transferring them to medical centers and hospitals in Armenia. The organization has also been supplying blankets, clothes, and other livelihood items to displaced persons from Artsakh. Thus far, Aleppo-NGO has provided more than $20,000 in assistance to Artsakh relief efforts. The host a family apartment where the family is staying is donated by the Chemberjian family.