The Aleppo Compatriotic Charitable Organization (Aleppo-NGO) said in a Sept. 3 statement that it has been following the devastation caused by Hurricane Harvey in Houston and other parts of Texas “with great pain and concern” and urged fellow Pan-Armenian compatriotic organizations to join them in contributing to the relief efforts.

“Our prayers and thoughts are with all the victims of Hurricane Harvey and their families,” said Ani Balkhian, founding president of Armenia-based Aleppo-NGO. “Syrian-Armenians fully comprehend the sorrow and pain caused by displacement. We urge the global human community, especially the Armenian Diaspora and the Armenian Government, to extend and expand their humanitarian support for the displaced in Texas.” 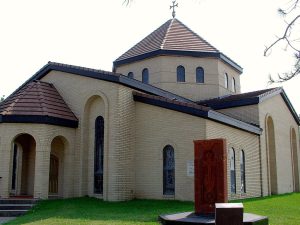 The hurricane, which struck Houston (and other parts of Harris County) and other coastal towns in Texas on Aug. 25, has thus far caused 51 fatalities, damage to more than 150,000 properties, and the displacement of more than 30,000 people, including members of the Armenian community of Houston.

While many would not associate Houston as one of the centers of the Armenian-American community in the U.S., the Aleppo-NGO has witnessed firsthand the vibrant nature of the Armenian community organized around the St. Kevork Armenian Church in Houston and its commitment to Pan-Armenian causes.

In April 2015, when Armenian neighborhoods in Aleppo were bombarded by al-Qaeda affiliate Al-Nusra, causing destruction and death, hundreds of Syrian-Armenians approached the Aleppo-NGO seeking financial assistance to be resettled from Aleppo to Yerevan. Realizing the desperate situation of the Armenian community in Aleppo, the Aleppo-NGO launched its “Save a Life” program to help resettle as many Armenians as possible from war torn Syria to Armenia.

Between April 2015 and Oct. 2016, the Armenian community in Houston—lead by the Parish Council of St. Kevork Armenian Church and its then-Chairman Vreij Kolandjian—contributed more than $60,000 to the “Save a Life” program, resulting in the evacuation of more than 160 Armenians from Syria.

Since October 2016, the IDeA Foundation has been cooperating with the Aleppo-NGO to implement the “Save a Life” program for the resettlement of Armenians from Syria to Armenia as well as other programs and initiatives in support of Syrians in Armenia.

In February, Kolandjian along with countless others from the Armenian community in Houston and beyond, had raised a significant amount of money in support of Syrian-Armenians. Realizing that the IDeA Foundation had stepped up to the plate to assume to role of financing Aleppo-NGO’s “Save a Life” program, the donors (primarily from Houston, Texas) designated more than $75,000 for the sustainable protection of Syrian-Armenian rights in Armenia through the creation of job opportunities for those Syrians already resettled in Armenia, contributing to their economic integration.

With the incredibly generous contributions of the Armenian community in Houston, Texas, the Aleppo-NGO is planning to soon launch a Middle Eastern Cuisine Center in Yerevan, which will help create job opportunities for Syrians in Armenia. The real estate property of the center has been purchased with the contributions of the Houston-Armenian community, and the remaining funds designated for the renovation and furnishing of the center have been pledged by Mr. Vreij Kolandjian and his friends from around the world.

Now, with the Texan-Armenian community devastated by the effects of Hurricane Harvey, the Aleppo-NGO calls upon the entire Armenia diaspora to support our compatriots in Texas by supporting the Parish Council of St. Kevork Armenian Church by contributing to its Hurricane Harvey Relief Fund. The Aleppo-NGO has contributed a humble amount to the relief fund, and urges fellow Pan-Armenian compatriotic organization to also contribute.

“We can never do enough to demonstrate our gratitude, as Syrian-Armenians, to the Texan-Armenian community,” said Balkhian. “But we will keep praying for their well-being as well as all Texans in these difficult and tumultuous times.”