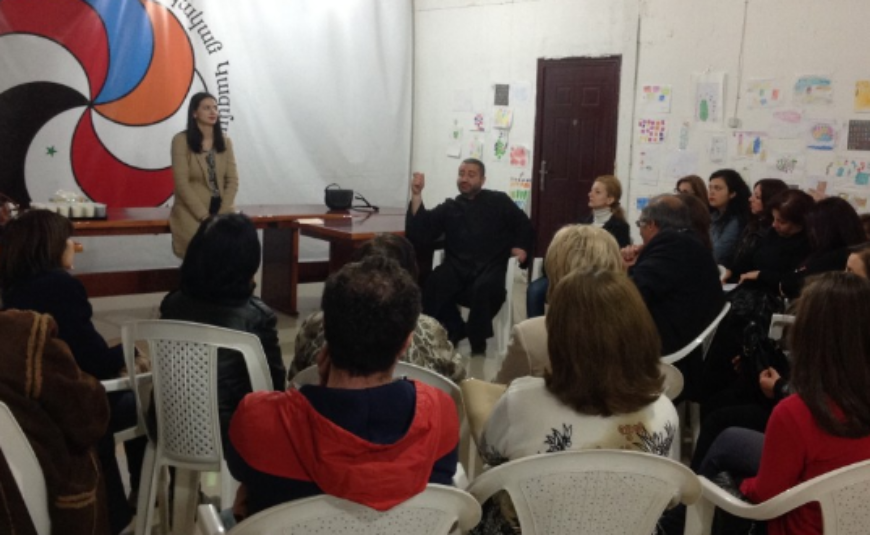 Description: Providing support to people who lost relatives and suffered material damage due to the Syrian Civil War has been one of the key priority areas for Aleppo-NGO since its establishment. As part of its humanitarian strategy, Aleppo-NGO recognizes that an important component of humanitarian aid is socio-psychological support which plays a significant role in the recovery process and future integration of people who survived tragic experiences – particularly refugees.

For this purpose, Aleppo-NGO holds regular meetings to ensure that all war-affected Syrians receive the socio-psychological support they need. Preservation of spiritual-moral qualities, restoration of social-psychological well-being and recovery of capabilities are the main goals of the meetings. Meetings take place every Friday at 13:00 at Aleppo-NGO’s office.

This project was initially sponsored and implemented by WCC Armenia Round Table Foundation , then funded by individual donors. Meetings were led by Ter Priest Grigor Grigoryan (pastor of Surb Zoravor Astvatsatsin Church of Araratian Patriarchal Diocese) and psychologist Lusine Khandanyan. Their work is now being continued by Aleppo-NGO.