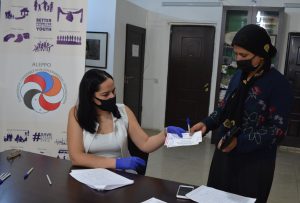 Ms. Eviya (pseudonym) and her family fled to Armenia in November 2019, after being displaced from their home in Ras al-Ayn (Northern Syria) as a result of Turkey’s ongoing military campaign: “Operation Peace Spring” launched on October 6, 2019. Her family also received financial assistance from Aleppo-NGO in June 2020 to cover her family’s expenses during COVID-19.

More than 10,000 Syrian-Armenian refugees are in urgent need of livelihood assistance to overcome the Coronavirus (COVID-19) pandemic in Armenia. The funds raised by this campaign is being used to provide food vouchers and financial assistance to the most vulnerable Syrian refugee families in the country.

The primary difference between local and Syrian Armenians is access to free housing.

While more than 90% of local Armenians privatized the homes they inherited following the collapse of the Soviet Union (according to Habitat for Humanity), more than 80% of Syrian-Armenian refugees in Armenia rent their dwellings (apartments and houses) and pay somewhere between $180-280 in rent each month. The median monthly salary in Armenia between January and April 2020 was $399.5 ($305 after tax).

The Armenian government has introduced 22 intervention packages to address the socio-economic challenges caused by the COVID-19 pandemic. The most significant assistance provided to workers during the pandemic was the Eighth Intervention package which provided between 68,000-136,000 AMD to full-time employees who lost their jobs and 100% of the average monthly salary (for January-February 2020) of part-time employees making less than the minimum wage of 68,000 AMD/month.

Unfortunately, with 87% of Syrian refugee workers being victims of labor rights abuses, including undocumented and un-registered employment, the vast majority (more than 70%) of Syrian-Armenian workers in Armenia either did not qualify to receive any financial assistance through the COVID-19 Eight Intervention or received minimal financial assistance.

Hovsep (pseudonym), a Syrian waiter who used to work for 78 hours a week (13 hours/day for 6 days) prior to COVID-19 and make 180,000 AMD ($375) in net income per month, received 26,820 AMD ($55) in financial assistance through the Armenian Government’s Eight Intervention because he was furloughed by his Syrian-Armenian employer- an owner of a café in the center of Yerevan—during Armenia’s quarantine between March 16 and May 4, 2020. 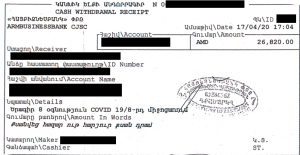 The receipt of the financial assistance Hovsep received through the Armenian Government’s 8th Intervention package.

Hovsep is not only a victim of labor rights abuses because he was being overworked (employees should not work more than 48 hours per week, according to the labor code of Armenia) prior to the pandemic, but because his employer had under-registered him to avoid paying higher income and social security tax, Hovsep only received $55 from the Armenian Government’s Eight Intervention, when he could have received 90,000AMD ($188) had he been a properly registered employee. Today, Hovsep continues to work at the same café but his work days/hours and his salary have been significantly reduced due to lack of economic activity in Armenia.

As such, while the Armenian Government is trying to indiscriminately support everyone in Armenia, due to legal status issues and undocumented and under-registered employment, many Syrian-Armenians are getting disqualified from receiving COVID-19 assistance from the Armenian government.

Having conducted a scientific survey to determine the level of labor rights violations against Syrian refugee workers in Armenia in 2019, Aleppo-NGO not only recognized that Syrian refugees were more vulnerable than local Armenians due to their housing situation and employment status, but it was also best positioned to advocate for and on behalf of the Syrian-Armenian community in Armenia.

The Offices of the President, the Prime Minister, and the High Commissioner for Diaspora Affairs responded to Aleppo-NGO’s letters but were unable to provide any funding towards the implementation of emergency programs addressing the special needs of Syrian-Armenian refugee families.

On April 14, 2020, in response to Aleppo-NGO’s April 13th letter, the Office of the President requested an official project proposal from Aleppo-NGO.

A comprehensive project proposal for “COVID-19 Financial Assistance to Syrian-Armenian Families in Armenia” was submitted by Aleppo-NGO on April 15, 2020, which remains under review and consideration by the Office of the President.

Moreover, a second project proposal was submitted by Aleppo-NGO to the Office of the President on May 6, 2020, requesting funding to acquire tech equipment (tablets or laptops) to enable vulnerable children and youth to attend to their school and university classes remotely. That project proposal continues to remain under review and consideration as well at time of writing.

Since the beginning of the COVID-19 pandemic in Armenia, Aleppo-NGO has provided:

*The most vulnerable families received both financial aid and food/hygiene vouchers. 25 of the beneficiary families 200 were vulnerable local or Lebanese Armenian families, who are also struggling economically in Armenia. 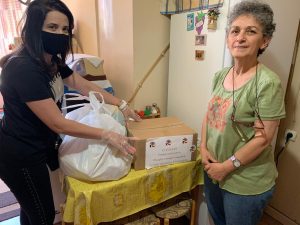 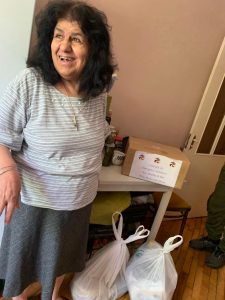 Going Forward: Aleppo-NGO is continuing to provide financial aid and food/hygiene vouchers to families in need, however, additional funding is needed to meet the urgent and deepening economic needs of an additional 600 vulnerable Syrian-Armenian refugee families.

We thank every single donor who has contributed to our ongoing COVID-19 fundraising campaign and all our partner organizations, including Armenia Artsakh Fund, Armenia Round Table Foundation, and Open Society Foundation, which have provided various forms of support towards Aleppo-NGO’s COVID-19 Relief for Syrian-Armenian Refugees in Armenia.