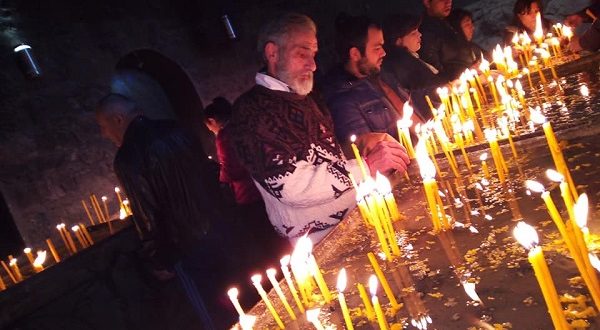 “Flowers, I love flowers!” exclaims Krikor. “I used to skip school so I could go and pick flowers. Everyone in Aleppo knew me by my nickname—I was Krikor, the flower seller!” 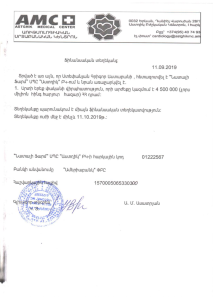 Copy of Krikor’s Financial Statement issued by Astghik Medical Center. Krikor is in need of 4,500,000 AMD (approx. $10,000) to have open heart surgery.

His eyes shone bright as he talked about the job and the city he loved. Krikor was as intertwined with Aleppo’s Armenian quarter as the honey-colored bricks of the old Orthodox churches. 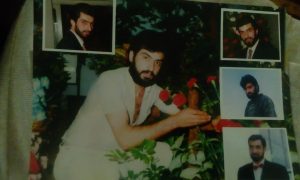 Everyone knew him, he says—he didn’t have friends, he had customers. They would go to see him for important and happy occasions—their weddings, new babies and birthdays—and he would lovingly put together a bouquet for them, made up of Aleppo’s finest blooms. “I swear, I was loved,” he says. “Any events that occurred, I enjoyed them. And at the end of the day, I would say ‘Thank God!’”

Two generations earlier, Krikor’s grandparents were famous too. “They were the za’atar makers!” he says. Za’atar is a fragrant blend of dried herbs, sumac and sesame seeds. “They were the best za’atar makers in all of Aleppo. All the survivors [of the Genocide of Armenians in Turkey in 1915] came to them to buy their za’atar.”

Krikor’s grandparents were also survivors of the genocide committed in 1915 at the hands of the Ottoman Young Turk Government. They fled their hometown of Konya, in central Turkey, and like thousands of others they settled in Aleppo and built the foundations of the city’s thriving Armenian quarter.

Like many others, Krikor started small. In the third grade he started selling flowers on the street. His business grew and he became well known. By the time he fled Aleppo he had his own shop and he had just put down the deposit on a house. “Everything I had I paid for with the sweat off my brow,” he says. “That was the first house I ever owned.” 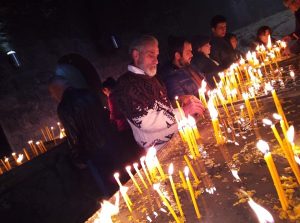 But throughout the searing summer of 2012, as the conflict began to encroach on Aleppo, everything started to change. The bombs and the curfews were the impersonal signs, but it was the sudden change in Krikor’s business that told the human story of what was happening. No one was getting married anymore; no one wanted to celebrate their birthdays. His customers started asking him to arrange funeral wreaths.

Krikor was one of the first Aleppines to flee Syria. In Armenia, Krikor couldn’t sell flowers, so instead he started painting homes and working as a security guard. Unfortunately, his local employers took advantage of his kindness and refused to pay him.

After finding a new job, he started accumulating money to try to bring his mother to Armenia.

In October 2013, while traveling to Aleppo via Turkey to see his mother, he fell foul of the conflict’s ruthless sectarian edge, which he had feared since the earliest days of the uprising. In between the border and Aleppo, the bus he was traveling on was stopped at a checkpoint controlled by Al-Nusra Front, one of the most extreme Islamist rebel groups. The fighters checked all the passengers’ passports, and those with Muslim names were allowed to go. Krikor, with his Armenian surname, was arrested, detained and tortured. His only crime was being a Christian.

Krikor was terribly tortured, electrocuted, and severely beaten with belts and hands. His entire body bled. “I survived thanks to my faith and prayers. I raised my eyes up to skies and asked forgiveness from my Lord,” says Krikor.

He was reciting prayers in Arabic while being tortured. The Arabic prayers helped him. The terrorists asked their leader to stop torturing Krikor, and he relented. If he hadn’t, Krikor would have become another Christian victim of the torture room. Krikor eventually escaped and reached Aleppo on foot.

After the situation in Aleppo escalated, Krikor relocated to Armenia once again with the help of the Aleppo Compatriotic Charitable Organization (Aleppo-NGO). In 2015, his mother was also resettled to Armenia through Aleppo-NGO’s “Save a Life” program. Krikor has two daughters, whom he cares for dearly…