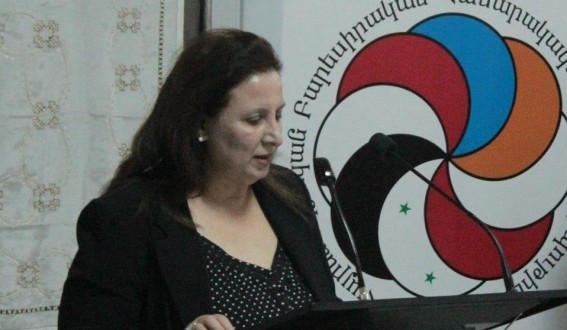 “Armedia” IAA presents an exclusive interview with Ani Balkhian, the founding president of “ALEPPO” Compatriotic Charitable Organization, on the current situation of Syrian Armenians relocated to Armenia and the programs aimed to help them.

– What is the number of Syrian Armenians in Armenia? Has their flow stopped or does  it still continue?

– As a result of Syrian civil war more than 17,000 Syrian-Armenians have migrated to Armenia. It is worth mentioning that in summer of 2012, when the number of our compatriots moving to Armenia increased largely because of dreadful war conditions in Aleppo, realizing all the difficulties and problems our compatriots could face in a new country, a group of Syrian women came up with an idea of ​​establishing a charity organization in order to give a helping hand to the fellow citizens through collective work. Thus in 2013 “ALEPPO” Compatriotic Charitable Organization was established.

The Syrian Armenians’ flow to Armenia still continues, and perhaps this is one of the reasons  that “ALEPPO” organization initiated “Save a Life” project in 2015, aiming to help the Syrian Armenians in a difficult financial situation to purchase a one-way ticket from Lebanon to Armenia.

– Your organization is implementing a number of projects to help Syrian Armenians. Is there any international support for those projects?

Since its foundation the “ALEPPO” organization has been developing and implementing long-term projects that facilitate the processes of integration and accommodation of displaced Syrian Armenian community. Today, nearly 1,500 needy Syrian families (5,000 individuals) have been registered in “ALEPPO” organization which in turn cooperates with a number of local and international organizations. For example, we reopened here ”Arevik” Armenia Center, which has been working for 13 years in Aleppo, aiming at helping mentally and physically disabled people. Necessary equipment, as well as the improvement of adequate facilities for persons with special needs have been provided by the US Embassy, particularly due to the project  “Better conditions for Syrians with disabilities” working in the framework of Julia Taft fund.

“Aleppo” organization initiated “Host a Family”project which is designed to create conditions of the first necessity for the most vulnerable Syrian-Armenian families, through humanitarian emergency housing, who meet certain criteria within the project. In the framework of the project, UNHCR provides furniture for obtained apartments according to official document on “Exchange of Letters” signed between “Aleppo” CCO and UNHCR.

“Aleppo” organization also implements “Save a Life” and “Adopt a Family” projects. Worldwide Armenian benefactors play a vital role in the implementation of these projects.

As previously mentioned “Save a Life” humanitarian campaign, aimed at providing support to Syrian Refugees, who escaped the war in Aleppo and moved to Lebanon, to obtain one-way ticket to travel to Armenia. In response to this large-scale humanitarian project initiated by “ALEPPO” CCO, people worldwide continuously raise funds in support of Syrian Refugees.

“Adopt a Family” project sets a platform for individual donors to get in touch with vulnerable Syrian Refugee families in Armenia through “Aleppo” CCO, to adopt and to provide monthly financial aid ranging from 100$ to 200$ per month to cover their living expenses (utilities, food and etc.). The project strives to create primary adequate conditions for Syrian Refugees to contribute to their settlement and integration in Armenia.

”ALEPPO” organization in cooperation with WCC Armenia Round Table Foundation has also carried out projects to help the people who suffered a loss of a relative or some material damage during the Syrian civil war by providing social and psychological support. “ALeppo” CCO also provides sociօ-psychological support to war-affected Syrian Refugee youth in order to build youth resilience and tolerance, as well as motivate and encourage them in their undertakings to pursue and achieve their career goals and educational endeavors regardless the place of their residency.

– What are the main problems that Syrian-Armenians face today? Are there any initiatives to overcome them?

– The daily work of ”ALEPPO” organization and deep studies of the social situation in the families of 5,000 Syrians show that the most urgent problem is housing, the need of shelter.

Thus “ALEPPO” organization has developed and implemented “Host a Family” project. In the framework of this project, ACCO finds benefactors to purchase modest apartments, ranging from U.S. $15,000 to $25,000 each, and allocate Syrian-Armenian families for rent-free temporary use.

It is worth to mention that “Aleppo” organization participated in the workshop titled “From Humanitarian Responses to Durable Solutions”. It aimed to facilitate the integration of Syrian-Armenians relocated to Armenia as a result of Syrian conflicts.

It is worth to note, that due to number of projects already implemented by “Aleppo” Organization so far, more than 80 Syrian-Armenian women have acquired knowledge and skills thus enabling them to grow and earn for a living.